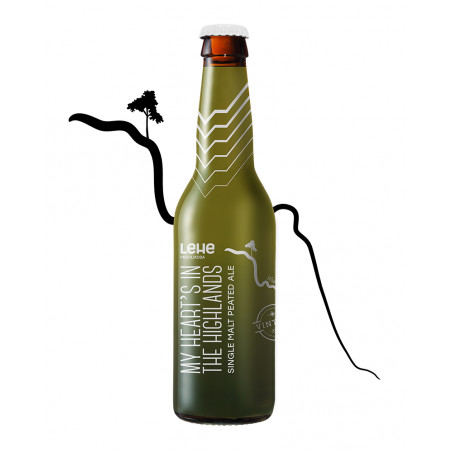 My Heart's in the Highlands Vintage

Our (Estonian) strongest naturally fermented beer is back, upgraded version of that. Brewed with peated whisky malts and aged in Laphroaig barrels.Since making such a strong beer requires an insane amount of time, materials and tears, the end result can vary considerably from batch to batch. We decided to add Vintage years to each new batch so you can make difference between them in the future.

Cloudy amber coloured beer, allmost no head. First aroma is warming and smoked, peated whisky – intensive like Estonian traditional smoked ham or smoke sauna. Wouldn’t say it’s a beer only from aroma.First taste is intensive malty, sweet, butterscotch - but strong, robust, edgy booze kicks in right away. It might scare away some people. Lots of nuts, dried dates, yellow plum in middle taste. Dry, oaky barrel notes in aftertaste. Smooth and soft warming alcohol and malty smokiness in finish.This beer is extremely freaky, something between peated whisky and strong beers. Food pairing would be too much for this, but we still recommend some nice olives or capres with it.