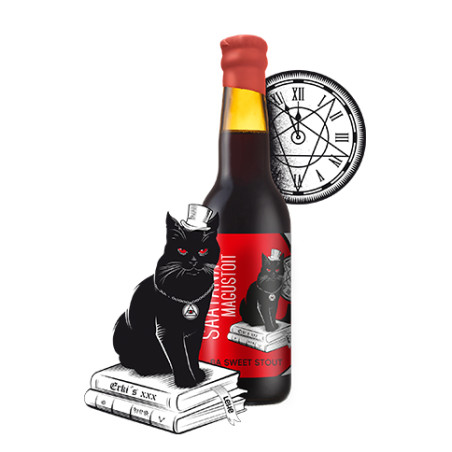 The first version of Saatana Magustoit released at TCBW 2016. This syrupy, dark and strong beer caused a lot of excitement. Some liked it very much, others were not willing to take it in their mouths again. Since the batch was relatively small, the bottles ran out of the official sales channels quite quickly.

A few years went by, and those who dug out of their beer cellars to open Saatana Magustoit, began to praise this beer more and more. Over the years, the initially suspiciously sweet liquid had started to become a more and more balanced dessert beer with an excellent combination of flavors.

Since the first version was born by a semi-random coincidence of different things, we were quite convinced until now that it was not possible to repeat the original recipe. However, after years of experimenting, we had reached, in our opinion, the place where we dared to try again.

The beer is now ready. The new version is definitely not exactly the same as the original, but it seems like we got the idea pretty good. It's already perfectly balanced for immediate drinking, but we believe this beer will continue to grow and develop as long as it lasts. That's why the Best Before is long enough 😊

Serving recommendation - start at cooler temperatures, such as 8C, as there is something to discover here both cold and at full room temperature. As an aside, we recommend opening the first version of Saatana Magustoit (if anyone still has them) and compare these two.